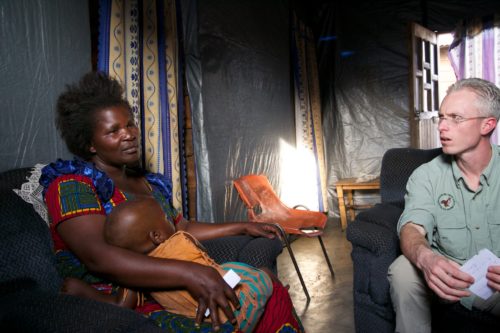 She and her husband had been working in their field when rebels came and took him away. She later learned that he had been killed. When she went to recover his body, she was raped. She then went to work for a church and was carrying flour with a group of women to the church one day when they heard gunshots and had to flee to the bush. In the bush she met others hiding and stayed there for three days until they decided to go look for food as they were starving. They were then captured by rebels, who separated the men from the women. Some of the men were burned alive. Others were forced to dig their own graves and then buried alive. Maman Rose, like the other women, was tied to a tree, beaten and raped. The rebels hacked the other women to death with machetes, while Mama Rose was left to die tied up to the tree. A man found her days later, still tied to the tree, and he took her to safety. She went back to her village and there she discovered she was pregnant. Her husband’s family kicked her out of their home, and Maman Rose went to Goma with her children, where her daughter was raped and became pregnant.

I talked with Maman Rose in a small house that Synergie provides for her and her seven children and one grandchild. She was contemplating suicide before Synergie came along to help her and she said she owes everything to them as she could not have managed without them. Amazingly, she said as a believer in Jesus Christ, that she forgave the rebels who attacked her. Her dream was that that all of her kids could go to school one day. For just a few thousand dollars, I have been able to make her dream come true and guarantee that all of her children will go to school through the rest of their school years.

Through Donor Direct Action, you can support the front line work of Synergie des Femmes in the Congo, and you can help women like Maman Rose rebuild her life.