Speaking at a special media event on 30 June hosted by Donor Direct Action, Ms. Wallström was commenting on the fact that Sweden had just been elected to a non-permanent seat on the United Nations Security Council where she hoped to have the opportunity to “make a feminist foreign policy for the world”, perhaps at a time when also the UN and the US will also be headed by women, she observed.

“Almost half of all peace agreements fail within 5 years,” she said, noting that this was partly because of the flawed peace process that failed to include women negotiators or mediators. But we are making sure there will be “no more excuses that there are no women” by training women as mediators and negotiators around the world, she said.

Sweden’s feminist foreign policy is made up of the three ‘Rs’, she explained: Rights, Representation and Resources. Does this policy ensure women enjoy the same rights as men and ensure that human rights are also seen as women’s rights? Are women around the negotiating table and represented everywhere? How are resources and power distributed? “When you ask these questions it will lead to our policy.” 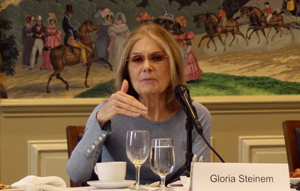 Making the connections – that’s the media’s challenge today, commented Gloria Steinem, the feminist leader and writer, speaking at the same event. “Our biggest struggle now is to understand that so-called women’s issues are connected to every issue. The status of females, in all our diversity is part of absolutely every story.”

Concerning the issue of peace, she pointed out that the single biggest indicator of whether there is violence in a society is not access to natural resources or the things you might think of like poverty, religion, democracy – the best indicator of violence is the extent of the polarization of masculine and feminine roles. “We need to consider this as part of our foreign policy” such as when considering what groups to be in discussion with in Syria. “The best indicator of their will to violence is their attitude towards women.”