“We have a dream that Syria [when we] return [will be] better than it used to be,” said Dr. Mouna Ghanem, founder of the Syrian Women’s Forum for Peace – a partner of Donor Direct Action. “We will continue to be united as long as this dream [is] with us.” 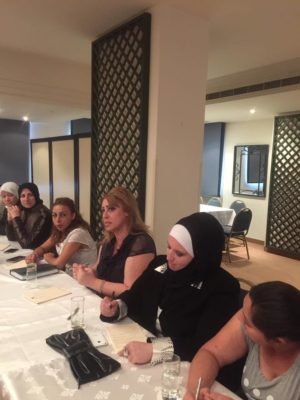 Some participants at the Beirut workshop, held 23-24 September 2016

Dr. Ghanem was commenting on social media about a workshop that she co-organized to prepare Syrian women to take an active leadership role in public life. The workshop, which bought together about 20 Syrian women already working on public issues or leading social and political initiatives, was held in Beirut, Lebanon, on 23 and 24 September.

The challenges facing women working in the public domain was a major area of discussion at the workshop, which was co-sponsored by Karama, a regional network in the Arab world working for women’s rights. 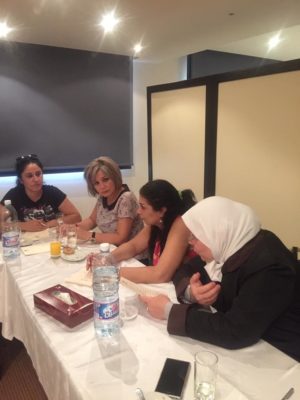 The treatment of women leaders and women’s leadership ethics were also topics for discussion at the workshop which fostered interactions using the techniques of brainstorming, group work, role play, listening and storytelling. Exchanging experiences was a dominant feature. The participants expressed their willingness to help build the capacities of Syrian women leaders who have women’s rights and empowerment on the top of the agenda of their organizations.

The workshop, called “Activating the Role of Syrian Women in Public Life” was the result of a needs assessment of Syrian women’s leadership skills.

Dr. Mouna Ghanem is a member of the Women’s Advisory Board that advises the United Nations special envoy in the Syrian peace talks. She facilitated the Beirut workshop along with Dr. Hisham Khayat.

Learn more about the Syrian Women’s Forum For Peace