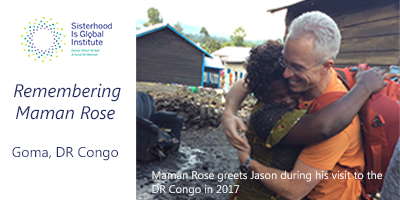 It is with deep sadness that Donor Direct Action grieves the passing of Maman Rose in Goma, DR Congo. A survivor of sexual violence in conflict who had to overcome insurmountable adversity in her life, Maman Rose was a pillar of strength to her family. She is survived by nine children.

Men carry the coffin of Maman Rose to the burial ground and family and community members gather for Maman Rose’s funeral in Goma, DR Congo

During the conflict in the DR Congo, Maman Rose’s husband was captured and killed by rebels. After his death, Maman Rose worked for a local church and one day gunfire erupted. When she ran into the bush to escape, Maman Rose was captured by rebels, tied to a tree, raped multiple times and left barely alive. Upon her return home, Maman Rose’s in-laws threw her out of her own home when they realized she had become pregnant. She then moved to Goma with her children where her daughter too was raped and became pregnant.

Donor Direct Action’s partner in the DR Congo, Synergie des Femmes provided a home for Maman Rose and gave her the support she needed. With consistent financial and emotional support from donor Jason Hackmann since 2016, Maman Rose built a new life for herself and her children, bought a house and set-up a small business selling timber. Most importantly, Jason helped Maman Rose finally realize her long-held dream of sending all her children to school. In Jason’s words, “Her story moved me like no other story I had ever heard and her pain went to the deepest part of my heart.”

In 2019, Maman Rose was diagnosed with breast cancer and Synergie helped her get to Uganda for treatment, which was unavailable in the DR Congo. Maman Rose recovered for a few months but on September 7, 2020 she passed away in Goma, unable to get back across the border to Uganda for further treatment and succumbing to a resurgence of cancer in her lungs.

We will always remember Maman Rose for her strength and unwavering resolve to safeguard the well-being of her family against all odds. The pain and trauma that Maman Rose endured echoes the experiences of the thousands of women who have been subjected to sexual violence in the DR Congo. In memory of Maman Rose, we will continue to support survivors of sexual violence helping them rebuild their lives and their children’s lives.  Our condolences go out to the children of Maman Rose, many of whom have suffered as she has.

RIP Maman Rose – we will carry your memory with us.