DDA partners with Marta to support women and girls in Latvia.

Marta Centre works to end trafficking in all its forms through education and public advocacy, and provides critical services for victims of trafficking and domestic violence. 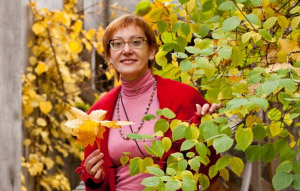 "Marta's team helps women regain their dignity, integrated personality and life. Together we can make a more just world—free from sex trafficking!"

While the government doesn’t fully comply with the minimum standards to eliminate trafficking, it is making efforts (increasing victim assistance, combatting sex tourism) to do so—in part because of education and lobbying efforts by the Marta Centre. This Riga-based NGO is active on numerous fronts. In public education, Marta has waged such successful initiatives as their Stop Trafficking Campaign, which raised awareness about different forms of trafficking, including:

Rare among even the worthiest anti-trafficking and anti-violence-against-women groups, Marta is also deeply concerned with prevention. It is involved in researching alternative means—coaching, self-help sessions, youth groups—of dealing with victims and of preventing violence, so as to avert perpetuating multi-generational traumas. Marta’s facilitation of Youth Leader girls’ groups and boys’ groups shows heartening results.

But perhaps the services offered by this small Centre are the most impressive, given its resources. Marta has a hot line for women in prostitution, trafficked women and for those suffering domestic violence or discrimination. It makes available legal support and psychological counseling for survivors. All the services—consultations with psychotherapists, psychologists, social workers, growth-coaching specialists, and lawyers—are free.

In 2011, Marta treated more than 300 women and their dependents. The waiting list for psychological support is so lengthy that the waiting time stretches longer than six months—due to funds being so sparse that Marta can hire only a limited number of counselors and psychologists.

The need is great, the resources small. But the stubborn dedication of the women at Marta Resource Centre is enormous.

Helena is only fifteen, but she knows. Knows what happened to Oksana, her older sister who answered an advertisement for a glamorous "model" job--then vanished into the trafficking network that imports and exports women and girls for sexual slavery.