DDA partners with ORMUSA to support women and children in El Salvador.

Working to end gender violence in El Salvador and to promote equality through the economic empowerment of women. 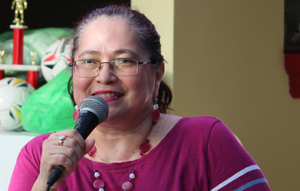 "We want a future with dignity and equality for women."

In the world’s most violent country, a place women can seek shelter

In El Salvador, a woman is murdered every 15 hours.  Often they are killed in a brutal manner, their bodies mutilated and tortured solely to inflict pain. Ending a relationship, seeking a divorce or even getting married are all reasons why women are murdered in El Salvador. They are killed because they are women and because the men who carry out these murders know they will probably get away with it.

Violence against women in El Salvador is endemic: rape, domestic violence, sexual abuse, femicide. Sadly, impunity is also common. For many years, the police and judiciary tolerated such violence and it is still common today to find public servants who directly or indirectly prevent women from obtaining justice.

Starting in the 1980s during the civil war in El Salvador, ORMUSA (Organización de Mujeres Salvadoreñas por la Paz) has developed programs to address the country’s continuing climate of violence that has given it the dubious honor of having the highest murder rate in the world.

ORMUSA helped draft a law that came into effect in 2012 making femicide – the deliberate murder of women just because they are women – a criminal category in El Salvador and establishing special provisions to protect women from gender-based violence.  But despite legal protections, 75% of femicide cases end up never being prosecuted.

“The law is fine, but the ones who have to implement it are the ones who have to change,” says Silvia Juárez, one of the law’s drafters and a lawyer and activist with ORMUSA. “We still have a lot to do in order to move forward and finally eradicate violence against women.”

Empowering women is key to changing attitudes in El Salvador, which is rife with machismo, and to ending the rampant gender-based violence. With communities and in the maquiladora factories (factories run by foreign companies that export the products out of El Salvador), ORMUSA develops programs on labor rights and women’s economic rights.

The organization is advocating for reforms to the country’s pension system to make it more fair and equitable for women. ORMUSA also belongs to a national alliance on sexual and reproductive rights that emphasizes health and education.

Femicide – the deliberate murder of women just because they are women – is common in El Salvador. On average, a woman was murdered every 15 hours during 2015.