DDA partners with Panzi to support women and girls in the Democratic Republic of Congo.

The Panzi Foundation supports the mission of the Panzi Hospital, which is to assure holistic quality care to the population through improved health care service delivery, community outreach activities, and advocacy. 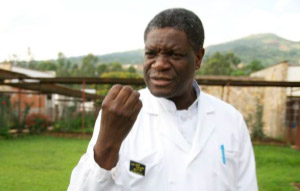 "I want you to know how much your support means to us. It saves lives, helping us pay for medicine and medical equipment to treat women who come to Panzi Hospital physically destroyed after they have been raped."

OPINION: UN Security Council should stand in solidarity with survivors of rape in conflict

“Peace cannot be achieved at the expense of justice,” says Dr. Denis Mukwege in response to Beni massacres

Rape as a Weapon of War

Dr. Denis Mukwege: one of the world’s 100 most influential people

For more than two decades, eastern Democratic Republic of Congo (DRC) has suffered conflict, with soldiers and armed rebels both using rape as a weapon, though recent studies also find an increase in rapes by civilians.

A 2011 study published in The American Journal of Public Health reported 1,100 rapes daily; more than 400,000 women and girls age 15 to 49 were raped during one 12-month period in 2006-2007—revealing that sexual violence against women is 26 times more common in DRC than UN reports had shown.

The Panzi Foundation supports the work of Panzi Hospital and expands outreach to rural clinics and communities. The hospital, built in 1999 under the supervision of Dr. Denis Mukwege, founder and medical director, promotes basic, quality medical care—especially maternal and reproductive health care–for Congo’s marginalized populations. It also promotes women’s rights, advocates for preventing violence against women and children, and helps survivors of sexual violence rebuild traumatized lives—including providing a school for their children, frequently the offspring of rape.

From 1999 to June 2010, the hospital treated more than 25,000 women for gynecological conditions, many severe sexual-violence cases—not only mass rape but penetration by guns and other objects; the Hospital also treats survivors infected with HIV/AIDS.

During the first half of 2013, Panzi Hospital provided medical care to 676 survivors of sexual violence, and 1,136 beneficiaries received psychosocial support through different outreach projects and activities. Foundation initiatives include:

Dr. Denis Mukwege–practicing physician, founder and leader of Panzi Hospital, its projects, and Panzi Foundation–has received many global honors, including the King Baudouin International Development Prize, the Clinton Global Citizen Award, and the Sakharov Prize for Freedom of Thought 2014.

Every part hurts--feet, trudging weeks from her village now stinking of corpses, burnt huts, and surviving kinfolk who drove her out. Neck cramping from the sack with her few belongings balanced on her head. Arms aching from the weight of a child butting her chest to nuzzle the dried breasts, his hunger howls joined by the newborn slung in a basket across her sore back.

OPINION: UN Security Council should stand in solidarity with survivors of rape in conflict