DDA partners with SFVS to support women and girls in the Democratic Republic of Congo. 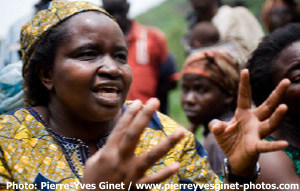 "It's a war against women. When two sides fight the one punishes the other by raping women. When I see the women come to me in search of hope, I say to myself, I must continue to struggle."

We risk our lives for peace

The ‘rape capital of the world’? We women in Congo don’t see it that way


For more than twenty years, Democratic Republic of Congo (DRC) has been at war, leaving nearly six million dead. Both soldiers and armed rebels wield rape as a weapon, and recent studies find an increase in rapes by civilians in the new, commonplace prevalence of sexual assault.

A 2011 study published in The American Journal of Public Health reported 1,100 rapes daily; more than 400,000 women and girls age 15 to 49 were raped during one 12-month period in 2006-2007—revealing sexual violence against women is 26 times more common than UN reports had shown for the DRC, arguably the worst place in the world to be a woman.

The medical section cares for sexual-violence survivors: surgical repairs of fistulas, HIV testing, and treatment for sexually transmitted infections (STIs). The psycho-social section has established 20 “listening houses” for victims of sexual violence; it holds seminars on the effects of sexual violence and trains counselors in psychological trauma work and family mediation. To help survivors reintegrate into society, SFVS provides them with income generating skills: dyeing techniques, sewing, braiding, livestock herding, and farming. The legal defense section lobbies for equal justice and coordinates legal assistance for victims of violence. It has also trained judges on sexual violence law, and initiated a campaign for establishing tribunals of international and Congolese judges to try high-rank military offenders for sexual violence and war crimes in DRC. SFVS broadcasts awareness messages on national radio and TV, and organizes conferences on Congolese law and the societal effects of rape.

The work is complex, hard, often perilous. But SFVS co-founder and coordinator Justine Masika Bihamba, herself the recipient of the Dutch Human Rights Tulip Award for her work, says, “I chose this work because my passion for the women and young people who are suffering from this human cruelty is so great that I dream of contributing to the mobilization of communities against the violence, as well as getting Congolese authorities to focus on the causes, and not the consequences, of the sexual violence.”

Throughout the DRC, ravaged by over two decades of war, the work is difficult and dangerous. In certain areas the female human rights defender is seen as opposing traditional customs; her family tries to force her to abandon her work, for her safety and theirs.