DDA partners with TNI to support women and girls in Kenya. 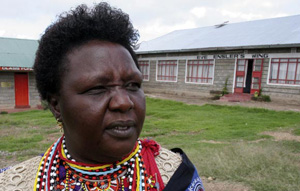 “The good news about eradicating FGM is that women will live a healthy life and girls will have a chance to go to school (…) Our community will benefit like other communities, and women will be empowered to make their own informed decisions.”

You can help Kenyan girls fleeing FGM get an education

African women are ending FGM on the front lines

FGM is a men’s issue too

Tasaru Ntomonok Initiative (TNI) is a community-based organization in the Southern Rift Valley, Narok District of Kenya, founded by Agnes Pareyio in September 1999. TNI works within the Maasai culture and surrounding community to eradicate the practices of Female Genital Mutilation (FGM) and early childhood marriages by educating girls and their families. In the Maasai culture, the practice of FGM is deeply entwined with the cultural traditions. Many families see it as a necessary rite of passage for a girl to become a woman. Combating these deeply held beliefs is no easy task, and TNI has to act on many fronts.

Tasaru means “Rescue” in the Maasai language, and TNI has been running the Tasaru Rescue Center for Girls since 2002 with support from V-Day. The Center provides a safe haven for girls seeking to avoid female genital mutilation (FGM) and early marriage. While at the Center, girls are enrolled in nearby schools. They are educated about the dangers of FGM and learn how to defend their rights through awareness-raising activities and workshops. TNI has also developed a weeklong rite of passage where girls can embrace the cultural traditions of the rite of passage to womanhood, without cutting.

In 2001, Kenya’s Parliament passed the Children’s Act banning FGM for girls under 18. For more than a decade, TNI’s Founder Agnes Pareyio has traveled the countryside to intervene on behalf of girls seeking refuge. By working alongside local authorities, traditional leaders and NGOs, she explains to communities the harm done by cutting and the legal ramifications, including fines and jail time that can result from breaking the law and forcing a girl to undergo FGM.

TNI also teaches families the benefits of not cutting: better health, but also increased educational opportunities and better future earning potential for girls who are not cut and rushed into marriage. TNI educates families about the benefits of keeping a girl in school, and the potential she has to earn an income for herself and her family if she is able to pursue a career instead of being married at a young age.

Finally, on the other side of the knife are women who perform FGM to earn a living. Without the practice, they fear they will be unable to support themselves and their children. For them, TNI has set up cooperatives where they can learn new skills and trades to make a living without needing to resort to FGM.

Agnes Pareyio, the founder of TNI is a recognized leader for women’s rights. She has been awarded the United Nations in Kenya Person of the Year Award for recognition of her work to end FGM. She was also the first Maasai woman to be elected to the office of Deputy Mayor on her county council. She served for two terms as Deputy Mayor and as part of the council for twenty years.

Judy* looks dazed and lost. A faint wrinkle creases her otherwise cherubic face. Her face says a lot about what she has endured, especially in the last few weeks and about her optimism about the future.

African women are ending FGM on the front lines